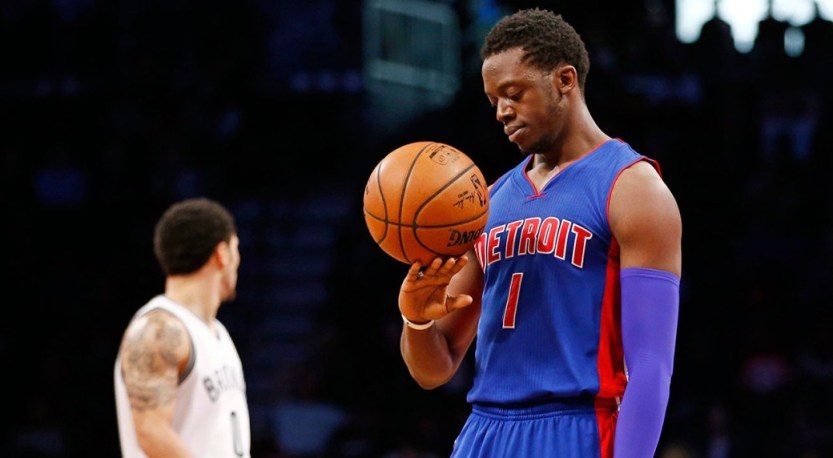 OKC had to move Jackson because a) his agent had demanded it, b)the two sides were far apart in terms of what they’d be willing to accept in a new contract.

Four short months later the Pistons and Jackson came to an agreement on a five year contract extension worth $80 million.

It’s been close to two calendar years since Reggie has been running the show, and the Pistons lead guard is averaging 18 points & 6.7 assist — in what is technically his third season playing in Detroit. Well according to the chart below.

As you can see, Jackson is behind last years career highs in the categories that matter. Granted, Jackson did miss 21 games after receiving  Platelet-Rich Plasma (PRP) injections. So to put it plainly, the jury is still out on the Reggie leading a team.

This season has been a stark contrast, as  Jackson sometimes looks as though he’s forcing the issue. Since coming back, Jackson has sort of thrust himself into the forefront of the Pistons offense, instead of letting the chemistry naturally gel over time.

Though Jackson has only played half of Detroit’s games, he already averages the most shots per game with 14

Although no one is exactly thrilled with Reggies’ low assist numbers, his field goal percentage and shot selection are the true problem.

[Reggie Jackson’s 5.6 apg is unofficially 27th in the league. To qualify, a player must play 70% of his team’s games.]

Warning: I’m going to use stats to illustrate a point. Well two points. The second being how anyone can manipulate numbers to make someone look good or bad.

Here’s the part where numbers don’t tell the whole story:

Problem with that last stat is the human brain seeks out things that make it feel better about a particular situation. Scoring over 20 points and shooting over 50% has literally happened 4 times, and Jackson overall is shooting 43% this season.

The Pistons lack team chemistry, the ball doesn’t move enough on offense, and players aren’t crisp on rotations on defense. They need a leader. And Jackson could be that leader.  At times he’s fiery, but at times he seems lost. At times he forces the issue, and at times when he’s (cliche’ alert) firing on all cylinders, the Pistons look like they can play with anybody.

Reggie Jackson is human, he’s going to have good days and bad days like the rest of us. The befuddlement for the fans come in when the wins and great play they desire, is too inconsistent.

Lately Jackson has been in trade rumors, which typically happen when a team is underachieving at the level the Pistons are.  Their record is 21-25. They’re in 10th place in the dreadful Eastern Conference, and last in the central division. Yet, 1.5 games back of the 8th playoff spot.

To quell the concerns of Jackson’s agent, Aaron Mintz, Van Gundy even sent his starting point guard, in the second of season of a five-year, $80 million contract, a text message reassuring him that no deal was imminent. “That’s what I’m saying – this stuff is crazy,” Van Gundy said of media reports. “And I’m not going to be the guy to step up and say, ‘No, no, no. None of these guys are available.’ Because I’m not lying to anybody. via Booth Newspapers

And here we are, 11 games before the All-Star break, still trying to figure out the riddle that is the Pistons season, and a large part of that riddle is the roster. Who fits well together? Chemistry is an underrated ingredient in winning.

With the recent report stating the Pistons only have two untouchable players (Kentavious Caldwell-Pope & Andre Drummond), Reggie looks to be running out of time proving he’s worth his salt.

With the Pistons looking to make the playoffs for the second year in a row, and the trade deadline less then a month away, there are decisions to be made, by both Reggie and upper management. For Jackson he has to figure out how to become more effective, and get the Pistons back on track.

Upper management also have to get the Pistons  back on track, but their way may involve sending some players packing. Is Reggie Jackson a building block?